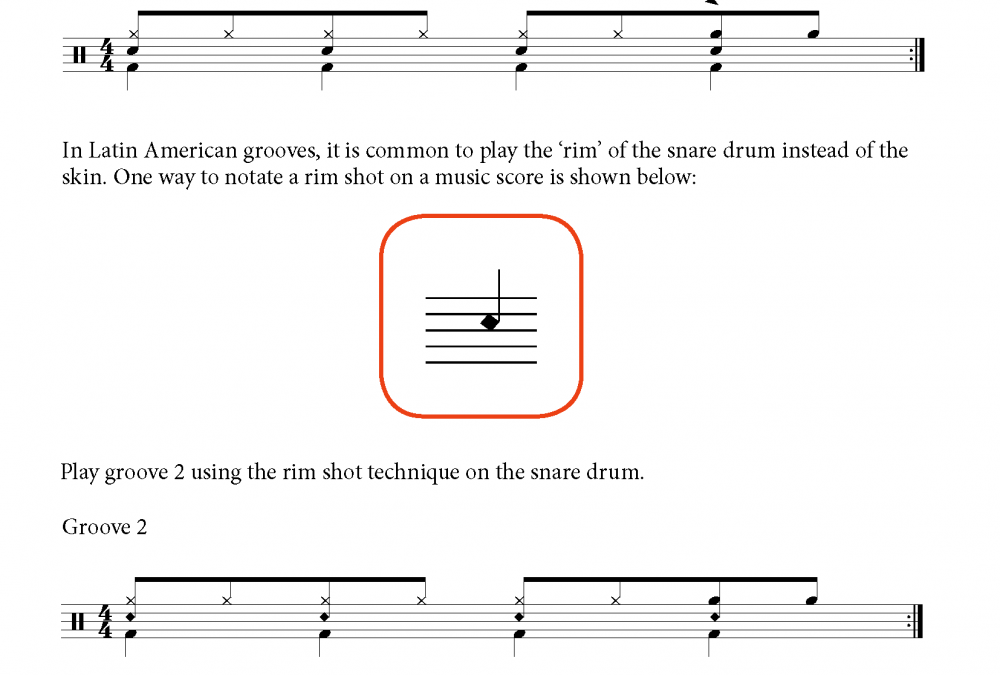 Welcome to the first ever guest post on learndrumsforfree.com!

The author of this post is Paulo Goncalves from Do Re Mi Studios in Australia. It is also his first ever guest post. The idea came about following this article that linked to learndrumsforfree at the end: ‘Five Drum Grooves Every Drummer Must Know’.

The guest post offers a lesson on Latin American drumming, which I don’t usually post about so I hope this will be useful and interesting to my readers.

Please also find attached a free PDF version of the post, which you may print out.

Originally from Cuba, the Cha-Cha typically features the beat on the hi-hat with the left hand playing on the snare drum. In addition, the right hand plays on the small tom-tom on the fourth beat.

In Latin American grooves, it is common to play the ‘rim’ of the snare drum instead of the skin. One way to notate a rim shot on a music score is shown below:

Latin American grooves often also use the hi-hat closing with the left foot. This is indicated in a music score as shown below:

Play grooves 3 and 4 with the hi-hat closing with the left foot on each beat of the bar. The right hand plays the ride cymbal throughout the rhythm.

In a typical mambo groove, the ride cymbal pattern is broken up around the tom-toms and snare drum. The hi-hat closes on the second and fourth beats.

In grooves 7 and 8, the hi-hat also closes on the second and fourth beats. The cymbal pattern is played on the ride cymbal with the right hand.

Originally from Brazil, Samba grooves are played fairly fast. In the groove below, play the tom-tom notes with the right hand.

Like the Samba, the Bossa Nova is also originally from Brazil. Bossa Nova grooves feature the snare and bass drum playing syncopated rhythms.

Written by Paulo Goncalves. For more of his articles check out http://www.doremistudios.com.au/blog/