Go To Tags and Search

5 Ways to Improve your Drumming Speed

Certain genres of music have high tempos as a defining trait. Speed metal, techno, trap and some types of folk music require you to consistently play 16th notes (or even 32nd notes!) at very high BPMs. But even classic rock or chillstep songs can have faster passages, sometimes known as speed-bursts, or a very intricate drum solo that is hard to execute because of the combination of speed and unpredictable, almost pattern-less lines.

Getting up to speed is not exactly easy. It is required that you physically practice playing at higher speeds, that you understand how muscles work, and to mentally recognize, feel and hear the 16th notes even at very high speeds. It is definitely a steep learning curve.

So, where to start? How about relaxing a little bit first.

1) Learn to play slow and precise:

This is a tip that has been repeated so often that it has completed its route from being the most popular advice to being the most hated one. Yes, learning to play slow will not increase your speed directly, but that is not the point. The point is to hear the beat and to get accustomed.

By playing slow, we mostly mean playing at slower tempos. Keep in mind that while playing at slower tempos, you can still add in speed bursts in form of 16th or even 32nd notes. That means that at a lower BPM, you can still play faster than when you play a high BPM. 16th notes of a lower BPM are still faster than many 8th notes of a high BPM. The low BPM simply makes it easier to get into the whole speed-game and it enables you to actually feel what you’re playing.

2) Relax your muscles as much as possible:

The second reason why you are supposed to slow down at first is to learn to relax. At higher speeds, we tend to tense up, and tension slows us down. So, to be able to play fast, you need to learn to control your movement, breathing, and tension. This requires a lot of mental effort and will take some time to get accustomed to.

Playing relaxed doesn’t mean playing quietly or slowly, though. It means that you are simply not straining a much as you probably do right now.

3) Start off slow and increase the BPM:

This is another widely repeated advice that is not wrong and that it is helpful, but please keep in mind that this is only part of the whole learning process. Learning a song part at a lower BPM, then increasing it is going to help you track your movement and get the precision down before getting the speed under control.

You can even take songs that you know and “over practice” them to get them down properly. Many rock acts play their songs at higher tempos live, which is both a way to reduce the duration of the venue and fit in more songs, but also gives a certain kick to the songs that are increasing the unique feeling of a live concert. Practicing along recordings of live performances might be a good idea for you.

While learning how to play a hard drum solo slowly and then working your way up the metronome, another way is to learn the solo part by part with very small segments played at the correct tempo.

This will help you get down the movements at the correct time and then all you have to do is put them together. This is very effective and becomes even more useful once you get better and playing fast because you will be able to learn and master solos this way much faster.

5) Practice speed bursts and double the amount of notes:

Another way to use lower BPMs is to practice speed bursts. Add to your patterns a small and short solo line or bridge that lasts only for one bar or even less. Or double the number of notes.

You can also create more solo-like lines from time to time. Lastly, you could try to consistently add a cymbal throughout the whole song, essentially changing the 8th note feel to a 16th note feel, though doing this consistently might not be very musical and also very difficult to pull off.

6) Be comfortable with your gear (Bonus)

As mentioned in the beginning, being relaxed is very important. This includes being used to your gear. Make sure you find the correct type of sticks and the best throne that fits your needs.

Experiment with different drum setups and don’t be afraid to change up your layout. Getting two bass drums or a double kick pedal might seem like a big change, but everything can be learned and mastered. Some setups work better for faster styles than others, so make sure to check out and draw inspiration from jazz, prog, and metal drummers to see how they are dealing with faster parts.

Learning to play fast cannot be done in a day, and mastering high BPMs can take a very long time. One thing that is sure is that it can be done with enough practice and patience. Try out different methods and don’t be afraid to search for inspiration out of your comfort zone. There are many different genres that utilize fast drum lines, so try expanding your musical repertoire. And should you get stuck, don’t panic.

Stagnation is a normal phase that we all go through from time to time and sometimes it can feel that you haven’t progressed in weeks or even months. But this will go away. Play fun songs that you are comfortable with and with each song, your brain and muscle memory will passively pick up certain details that will help you increase your speed later on.

Peter has a passion for music since he was 12 years old. Enjoying jamming and teaching, he runs Net Sounds Music, a space to learn and get involved with music. 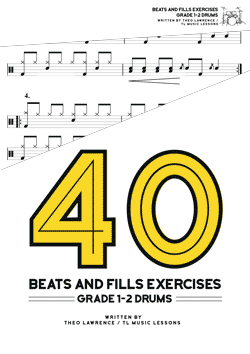